A Muslim Fast, for a Christian Priest

Home Posts A Muslim Fast, for a Christian Priest 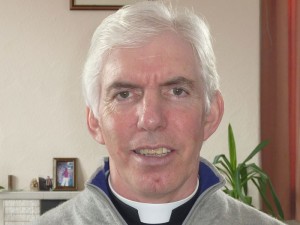 Each year, for the last ten years, I have chosen to fast for one day during the month of Ramadan. But why would I, a Christian priest, choose to do such a thing? Traditionally, fasting has been given great importance by the major faiths of the world, and Christianity is one of those faiths. However, relatively few Christians, these days, would observe a fast that lasts most of the day. Even on what Roman Catholics, like me, would call “fast days”, the Church law would still allow us to eat one main meal and two collations (light meals). Many might think this laughable as a fast! But, if the Church law does not require too much of Roman Catholics, more demanding fasts are part of our tradition and are still encouraged.

In a country where consumption is such a major dynamic and obesity rates have increased from 5% to 16% in the last 30 years, it is surely necessary to signpost a different way. To quote the Christian scripture, “Man does not live on bread alone, but on every word that proceeds from the mouth of God.” It is important to stress, however, that fasting, in the religious sense, is not another type of diet but rather a deliberate opening of ourselves to a different, life-giving dynamic. It takes us, at least for a while, out of the cycle of consumption and invites us rather to focus on the presence of God in life.

But, why would I, a Christian, share in a specifically Muslim fast? It is about understanding. It’s a common complaint that politicians don’t really understand what it’s like for us because they haven’t had to walk in our shoes. It was with some interest, then, that, a few years ago, I read about Barak Obama before he became the President of the USA. As part of his campaign, he decided to spend a day “in the shoes” of a home care worker from Alameda. The care worker, Pauline Beck, was at first understandably cynical about the whole exercise, and, to make matters worse, she was a supporter of Obama’s then rival, Hilary Clinton. Obama arrived at Pauline’s home, with reporters in tow, just in time for breakfast. She then took him to meet her 82 year old charge, John Thornton and explained her duties. Obama diligently set about mopping floors, preparing food and doing the laundry. A year later, Mr. Thornton is reported to have quipped that Pauline “was working the Hell out of him”. For her part, Pauline was impressed with the way Obama related to Mr. Thornton saying, “He made it his business to understand”.

While experiments of this nature are always limited, there is still the potential for genuine understanding. It’s the same for a Christian, or anyone else, sharing in at least some of the Muslim fast. Yes, getting up in the morning before the sun rises to eat a breakfast that one hopes will give sufficient energy for most of the day, is itself a shock to the system. Then, during the course of the day, one realises very quickly the number of internal and external messages we receive to make us long for a snack and question our sanity in agreeing to such an exercise. But, to stick with the fast until sunset certainly gives one a glimpse of what it’s like for those who have to fast every day for a month.

A few years ago, a non-Muslim senior Oldham police officer agreed to do the fast for one day along with several of his work colleagues. He spoke of understanding, for the first time, what it was like, during the month of Ramadan, for the Muslim police officers under his command. But I have also found that Muslim neighbours and friends are so appreciative of the fact that non-Muslims might be bothered to engage in such an exercise. It has clearly come across to them as a genuine attempt to extend a hand of friendship and they have warmly grasped that hand.

When I first started to share in the Ramadan fast, back in 2005, it was just after the earthquake in Kashmir. There was that extra sense, then, of associating ourselves with those who were suffering. It was a poignant recognition that life could not just go on as usual for everyone else in the world. This year, images of the massive destruction that has taken place in Nepal, and reports of the resulting thousands of deaths, have entered our living rooms through the Media. Once more an earthquake provides the backdrop for the Ramadan fast and, perhaps, the motivation for more people in this country to opt out, for a while, from the cycle of consumption to make ourselves more aware of others in need.

He was Chair of the National Conference of Priests of England and Wales from 1997-2000.

He was the first Chair of the Oldham Inter Faith Forum. He is now Project Manager, in a voluntary capacity, for the Inter Faith Development Project in Oldham. From 2010 – 2015, he was Chair of Oldham Race Equality Partnership.

He is a member of Oldham’s Safer and Stronger Communities Partnership Board and a member of the Oldham Voluntary, Community and Faith Sector Partnership.

He gained his Masters and Licence in Canon Law from Ottawa University and serves as an Ecclesiastical Judge in the Salford Diocesan Matrimonial Tribunal. He is also one of a team of Presenters for the BBC Radio 4 “Daily Service”.

In February of 2006 he was the Individual and “Overall” winner of Oldham’s first, and only, Diversity and Equality awards and, in September 2006, he was named in a British national newspaper as amongst the top fifty British “campaigners, thinkers and givers transforming our world” (The Independent Newspaper’s “Good list”, 1st September 2006). He has lectured for UNESCO on “Intercultural mediation processes” in Barcelona in 2006 and (Feb. 2008) in Brazil at the World Conference on the Development of Cities.